Hoshangabad, India —  The boat you see is a ferry system to cross the Narmada River. I just rode in the boat to this shore and know why the men are standing:  the bottom is full of water. As I rode across, I raised my legs as I sat on one of the benches, trying to balance my shoes on the curved side of the boat to avoid inundation. A memory of a doctor’s warning against touching open water sources in India flooded my head; but I could not have anticipated this adventure.

Now on dry land, I am standing on the sloping shore of a bank that rises to a forty foot cliff behind me, with farmland beyond. The men in the boat are headed to the urban center at the far shore, lined with massive steps and platforms that lead down to the river.

As the oar man pushed the boat away from the shore, the morning light perfectly illuminated these men, the river and the distant scene. I moved quickly to center myself with the boat as it pulled away. At one moment, the men all turned in their own directions, looking outward, contemplative.

I came to this shore with farmers and men from communities along the Yamuna River, another famous big river in India, farther north. We were staying on a farm in Hoshangabad for a workshop on no-tillage agriculture, an alternative approach to conventional tilling of soil. Over time, tilling exhausts the soil and farmers often turn to inputs like fertilizer or pesticides to make up for nature’s decline. These inputs eventually make their way to rivers, harming aquatic life and people. But at this moment, I’m not thinking about soil or farming. I’m awestruck by the sights around me. This is my first time seeing a river being worshiped. 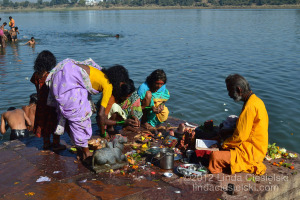 A priest with women leaving offerings to the Narmada goddess: fruit, flowers, candles.

In the Hindu religion, the Narmada River, like other rivers in India, is considered holy – a goddess – and is revered through prayer, offerings, and bathing in the water. To bathe in the Narmada is part of a lifetime’s religious pilgrimage to all the major rivers in India.

The group and I came to this rural shoreline away from the stone steps and the people so that they could bathe in the Narmada. While the shore was full of people actively washing themselves, their clothes, offering prayers, and swimming in the water, the activity was also just downstream of a nallah sewage outfall — a source of untreated sewage. 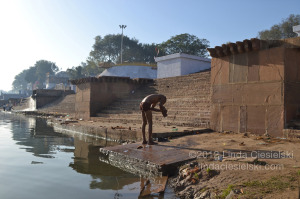 While rivers are considered holy in India, pure and clean from a spiritual standpoint, they may also be full of untreated sewage, industrial effluents, and agricultural waste. Describing a river as dirty is not simple when the river also has significant cultural value and religious meaning.

Everyone in the group I was with was well aware of what plagued the Narmada River, the Yamuna, and other rivers. But the men in the group proceeded to undress down to their undergarments and go for a bath. They laughed and splashed in the water, swum on their backs, and smiled to each other at having ventured this far to see the Narmada. The only two others from the group who chose not to bathe, aside from myself, were doctors.